I never claimed to be good at arranging flowers.  Some of my favorite blogs out there have multi-talented writers who are especially good at it.

And at the risk of these arrangers seeing my half-baked attempt, I present to you my Azaleas in a Vase! 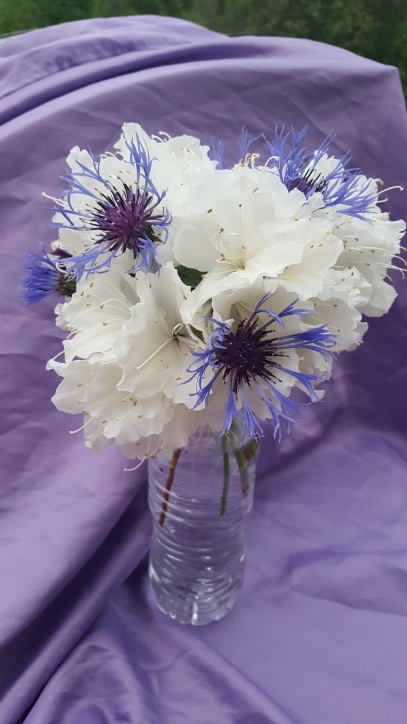 Well, it’s not actually a vase.  I’m in a recycling mood.

And to be honest, not much in my yard was blooming last week when I went out to gather something to bring indoors.  That is the spirit of a weekly meme that is hosted by Cathy at Rambling in the Garden called “In a Vase on Monday”.  Bring some of the beauty that is in the garden into the house to be appreciated there.

I never really thought to bring azaleas inside.  But I’m glad I did.  Again, those bloggers who are so good at arranging actually inspired this choice.  Thanks to John and his arranger over at A Walk in the Garden, who have used their Encore Azaleas quite successfully in one of their latest posts.  Mary, who writes one of my new favorite blogs, Home is Where the Boat Is, recently featured azaleas in a post highlighting an adorable potting shed wreath.  Thanks for the azalea inspiration!

I had no idea these blooms would last so long indoors, and I really love the backdrop they create for these Bachelor Buttons.  As an aside, I hope these are Bachelor Buttons, as that is what my garden friend called them.  I’ve tried searching with Mr. Google and come up with Corn Flowers, Centaurea Cyanus, and Knapweeds as possible relations.

These bushes are very close to the front entrance of my house.  So we are very careful not to disturb these bumblers on our way in and out.  Luckily, they are not a quiet hummer, so we know when they are around.  These giant bumble bees really enjoy the thousands of blooms that are there.

Are bumble bees as beneficial to the garden as honey bees?  Again, I’m not the expert here, but I’m hoping these guys are doing some good!

As promised, here is a vase of cosmos straight from the border.

The kids really outdid themselves with their  Mother’s Day gift for me this year.  I hope they remember how excited I was when I received the flowers, seeds, and bulbs.

I’m equally as pleased with the results – some truly beautiful dahlias that I featured in last Monday’s Vase, and these spectacular Summer’s Dream cosmos.

Once again, my limited arranging experience shines through on the simplicity of this arrangement.  But I think Mother Nature hit it right when she set these airy leaves with these gorgeous flowers.  I could see no reason to add anything more.  The vase is a Lenox piece we received as a wedding present some 29 years ago.

I love the watercolor effect of the petals – something I would never have had the chance to appreciate at the plant’s current height of 7 feet!

Putting these specimens in a vase and photographing them really lets me appreciate the beauty up close.  While the photo session happened outside on the covered deck, I will be enjoying this arrangement in my kitchen while I pack lunches in the morning and make dinner in the afternoon.  Ahhhh.

Thanks to Cathy at Rambling in the Garden for encouraging us to bring those flowers indoors each week and share them.

My first submission to Cathy’s In a Vase on Monday turned out to be more challenging than I thought it would be.  I knew exactly what flowers I wanted to highlight, and coming up with a container that was tall enough to handle my tall Creamy Callas left little room for creativity.

This tall vase doesn’t seem to be as original as what I’ve enjoyed from other participants, but hopefully you will forgive me.

These lovely Callas were given to me by a friend at the office, Diane.  Last fall, she sent out an e-mail offering calla corms to whoever wanted them.  Of course, I snatched 6 right up.  I kept them in the garage all winter, and actually rememberd to bring them out and plant them back in May.  They sprouted almost immediately, and in mid-June, they started blooming.

The leaves of this plant are interestingly speckled.  I checked with Diane as soon as the leaves unfurled, I was concerned I had some sort of blight!  But that’s the one feature she really loves about this variety.

I like the creamy yellow color, and matched it up with some of the enormous blue hosta leaves that grow in The Shade Garden.  My daylillies are up and blooming, and I chose of few of their leaves to offset the height a bit.

The true challenge came from actually photographing this arrangement.  I really need some practice on lighting, avoiding shadows, choosing backgrounds.  It’s amazing how much you pay attention to the details of other shots once you have tried to do it yourself!

Of course, true to how I roll, I’m submitting this entry with little time to spare!  It’s still Monday, tho!!

I’m going to sound like a real ingrate here, so be forewarned!

I have to tell you that my initial response to the very idea that my husband actually ordered my Valentine’s Day flowers online was one of disappointment.  I’m not sure they are even considered mailorder, but I guess the same amount of effort went into ordering these lovelies from proflowers.com than would have taken to pick up the phone and call the local florist.

But part of me really hates the idea.  We remark all the time how the local florists don’t really seem to exist anymore.  Same way the local bakery went.  And I guess we are contributing to the demise.

I had to stifle a laugh on my weekend trip to WalMart last Sunday.  The entire produce department was piled sky-high with bouquets of roses.  A dozen roses at WalMart went for $15.99.  Can’t beat the prices at WalMart.

And there’s the conundrum.  With the current state of affairs in the US, most people are working far more for far less.  And when you have less to spend, you really start looking for the best deals in town.  Unfortunately, those deals come from the closest WalMart.  I hate shopping there, I really do.  But the prices truly help put food on the table for this crew of 5 that I feed.

So back to my flowers.  They arrived a day late, due to a snowstorm that actually sent our township into a State of Emergency.  So the extra day led to my flowers arriving on Valentine’s Day, but not in the best of shape.  The kids were home when the box arrived, so they did their best to prep the flowers.  They cut the stems and placed them in water, just as the directions stated.  They looked pretty sad when I got home from work that day.

But they soon recovered.  On day 2, the alstroemeria perked up – I had thought they were dead – and the roses started to recover.  I do not know how but they look better today (day 4) than the day they arrived.

So I will take it easy on my husband – he works very long hours and seriously does not have the time to stop in at any local florist – even if there were any around.  And he knows I love flowers, no matter where they may have gotten their start in life!

And aren’t they gorgeous!

At least he didn’t buy them at WalMart!

I love flower gardening - and dream of making a living by playing in the dirt. This is where I share! It's cheaper than a therapist!

This one in the category of "wow - I don't remember planting this one" but I'm so happy I did!!
Captivating brugmansia - its been a very peachy summer!
One of my favorites just bloomed yesterday!! Happy July!!
First bloomers of 2018 - bring it on!!
These take me back, way back. Love me some 4 o'clock memories.
Or this one - decisions, decisions!