Three names of three storms that hit the US this past year, 2017.  Storms so intense that those in the path either board up to ride it out, or run.

The pets in the path of these storms were also in peril.  I cannot imagine the anguish that must be felt, the desperation that has to be lived, the utter unthinkable thoughts of leaving a pet behind when faced with the challenge of survival.  How?  I don’t ever want to know.

But what I have learned is that there are people who are willing to do whatever they can to help these helpless souls who become victims through no fault of their own.

Speaking for those who cannot speak for themselves.  It’s the motto of our local animal shelter that put out the call.  Who answered the call.

The Facebook page allowed us followers to witness the rescue of 12 little souls who were transported to the Pittsburgh area in the hopes that our shelter could take them in and find them temporary if not furever homes.

The shelters in Florida were packed as a result of taking in extra dogs from Texas and Hurricane Harvey.  Then came Hurricane Irma, and more room was needed for the inevitable influx of abandoned pets in the wake of this natural disaster.

The shelter volunteers loaded the van with crates and took off to the county airport to meet the 12 dogs they promised to rescue.  And they were met with 16.  How could they turn away 4?

The Southern 16.  A story of survival.  And with these extra 16 dogs to care for, the word was out that the shelter needed help.  It was something I had thought of doing so many times, but for one reason or another, just never did.  Timing is everything, a friend once said.  And the timing was now right.  I found 2 hours of my week to help out at the shelter.

I have to tell you that those two hours a week are some of my favorite.  Walking into the shelter on Thursday mornings, knowing those pups are so happy to see me, if not just for the opportunity to empty their bladders from the long night!  They know they are getting a nice long walk, and then back to the shelter for breakfast!

This shelter is a no-kill, and I’m amazed at how quickly some of these dogs get adopted out.  Animal Friends is very particular and careful to adopt the dogs out to the perfect homes.  There are still 3 pups from the Southern 16 hopeful to find their families soon.  Until that time, we will continue to love them while they are here.

Oh, and the dogs that find their way to the shelter seldom tell us their names.  We give them temporary names.  Three of the Southern 16 were given names of Irma, Maria, and Harvey.

Irma and Maria are still waiting.

I’m going to take it as a compliment that wildlife seems to be exploding in my yard this year.  Just a few weeks ago, my wisteria became a temporary housing development for a family of robins.  I can’t believe how quickly this little nest of eggs became a little nest of baby birds.  And they are on their own, not 3 weeks in total. 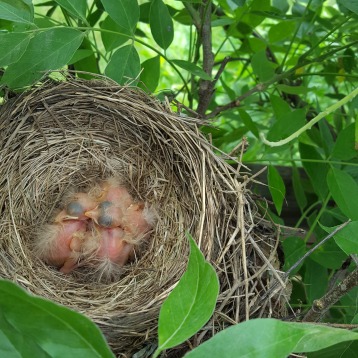 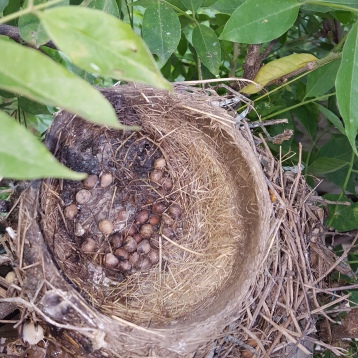 Last evening I was out tending to a border along my fence when Willis discovered a family of baby bunnies right on the edge of the lawn.  I had no time to teach him to be gentle, that these little creatures were not playtoys.  They did sound like little squeaky toys.  I prefer never to hear that again.

It’s not unusual for rabbits to make their homes right out in the open like that.  The more I thought of this location, the more I realized that predators usually won’t attempt an attack right out in the middle of a yard.  At least that’s the excuse Mr. Google gives for this seemingly careless choice of location, Mama Bunny.

It was surprisingly well hidden right in plain sight!

Do you see a nest? 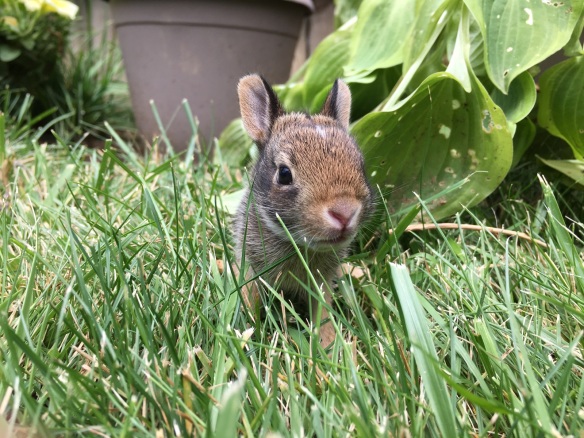 This isn’t the first time that Willis has brought my attention to some bunny friends.  However, mama moved that nest shortly after his last discovery, or so I choose to believe.

Speaking of that wisteria, I really need to get that vine under control.  Here’s hoping there’s not another family hiding within!

Postscript:  Our little family of bunnies got flooded out of their home shortly after this post was penned.   Thanks to our local Wildlife Rehabilitation Center for the quick call back (on a Friday evening, well after regular hours.  These people are the best!)  They guided us through a rescue effort, and I know that we did all we could to provide these little guys shelter until the Mama Bunny came back to take care.  We tried to save them, but Mother Nature had other plans.

Finally, after 20 years of a dogless existence, I caved.  I admit, it didn’t take much.  The most difficult part was convincing the Hub that the kids are old enough to train, exercise, feed, and take responsibility for a dog.  It was easier than I thought.  Turns out, all I really had to do was tell him that I really wanted a dog.

Son #2 is very resourceful, and can be very convincing when he wants something.  He could smell my guard coming down, he could sense my husband’s weakening reluctance.  We were being circled by the shark, and never saw it coming!

S#2 also has a big heart.  He searched online for a rescue, and fell in love with a little guy being fostered at our local Animal Friends.  OK, we will go meet him.  And that’s all it took.  We walked in and asked to meet Willis.  I could tell the staff really liked Willis, and I soon found out why.  He walked right over to S#2, plopped down at his feet, rolled onto his back, wanting his belly rubbed.  Which resulted in a good belly rub!  Instant friends!

Willis has been part of our lives for all of 3 weeks.  He’s not actually a little guy.  At an estimated 5 months, he weighs in at 38 lbs!  He’s a really good dog – didn’t take much to house train – is very good-natured.  I’ve actually lost 7 pounds, because he really needs to go on a daily walk.  He’s a bundle of energy at times, and with a small house, there’s not much room to run around.

Learning how to live with a dog has proven to be challenging at times.  We are all adjusting!  Gardening doesn’t come naturally to this dog.  Wanting my undivided attention while outside, however, does.  He loves to dig and he loves to grab a mouthful of grass and flail it side to side, just to watch the grass fall out of the sky.  It’s actually bringing back memories of trying to garden with small children in tow.  It’s not the solitary experience I’ve come to enjoy in recent years.  But again, we are all adjusting!

Don’t tell S#2, but I know that Willis is actually my dog.  While the kids are all old enough to be responsible for the dog, truth is, they are also old enough to want time with their friends.  They have busy lives, and adding a four-legged friend to the mix is a foreign idea.  So, Willis is my garden bud.  I need to harness his love of digging – maybe we’ll plant a tree!

I love flower gardening - and dream of making a living by playing in the dirt. This is where I share! It's cheaper than a therapist!